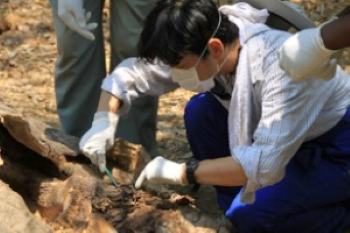 Division of Infection and Immunity,

Research for molecular mechanism of pathogenesis in Bacillus spp

Anthrax is a disease caused by "Bacillus anthracis" infection. In humans, "B. anthracis" infects mainly the skin, lungs, and gastrointestinal tract. The toxin produced by "B. anthracis" causes cell necrosis which subsequently results in serious damage to infected tissues. Cases of lung and intestinal tract anthrax are life-threatening and have a fatality rate of over 90% if left untreated. In Japan, the last reported case of anthrax occurred in 2000 in cattle. On the other hand, anthrax is still a major problem among animals and humans in African and Southeast Asian countries. Since 2011, we have been working with University of Zambia School of Veterinary Medicine to conduct anthrax surveillance in livestock, wildlife, soil and other environmental samples in Zambia. Coincidentally, when we started our anthrax research in 2011, there was an anthrax outbreak in northeastern Zambia, which affected more than 400 people including 7 fatalities in one community. Furthermore, hundreds of wildlife carcasses were found around the community. We introduced molecular diagnostics to Zambia to help elucidate the causes of the anthrax outbreak. It was found that the outbreak was caused by the spread of the infection by taking meat of hippopotamus which died of anthrax to the village for food. Our subsequent investigations have revealed that a number of wild animals, including hippos and elephants, occasionally die from anthrax. Wildlife is considered a valuable tourism resource in Zambia, we will continue to work with government agencies in Zambia to conduct research and help to mitigate anthrax in the country. 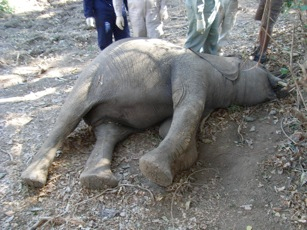 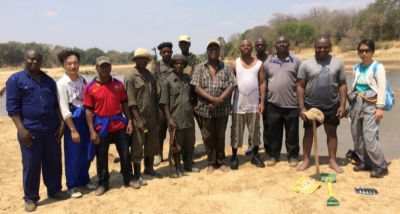 The elephant that died of anthrax      The 2016 Anthrax Research Team